In the Yonge-Eglinton area, Distinction Condos are bringing an entirely new brand of condo to one of Toronto’s most popular areas. Distinction Condos is the brand new project from the renowned LASH developments. Distinction Condos will feature all the luxurious amenities you’ve come to expect from the increasingly Condo market, where developers are pulling out all the stops. At Yonge and Eglinton, LASH developments are no different, with a complete set of amenities that include a library, digital hub, bars, lounges, fitness room, yoga and dance studio, outdoor terrace, presentation kitchen and bar, lounge area, and dining room. Not to mention the fabulous roof top plans that include indoor and outdoor kitchens, lounges, sundecks, and a meditation area. Distinction Condos are an exercise in a complete vision of the modern condo. Residents will be treated to a stunning exterior design that will stand out in Toronto’s skyline. Designed by Giannone Petricone Associates Inc. Architects, the new Distinction Condos is not your run of the mill Toronto condo, but a unique structure that anyone can use as a talking point. The building twists and turns as it acts as a relic of modernity and urban design, complete with sleek white edges and a daring point. Inside, each suite each suite has been meticulously designed with the resident in mind, with streamlined floor plans that incorporate ergonomic living and spacious mindfulness. Distinction Condos is excellence in motion from LASH developments. 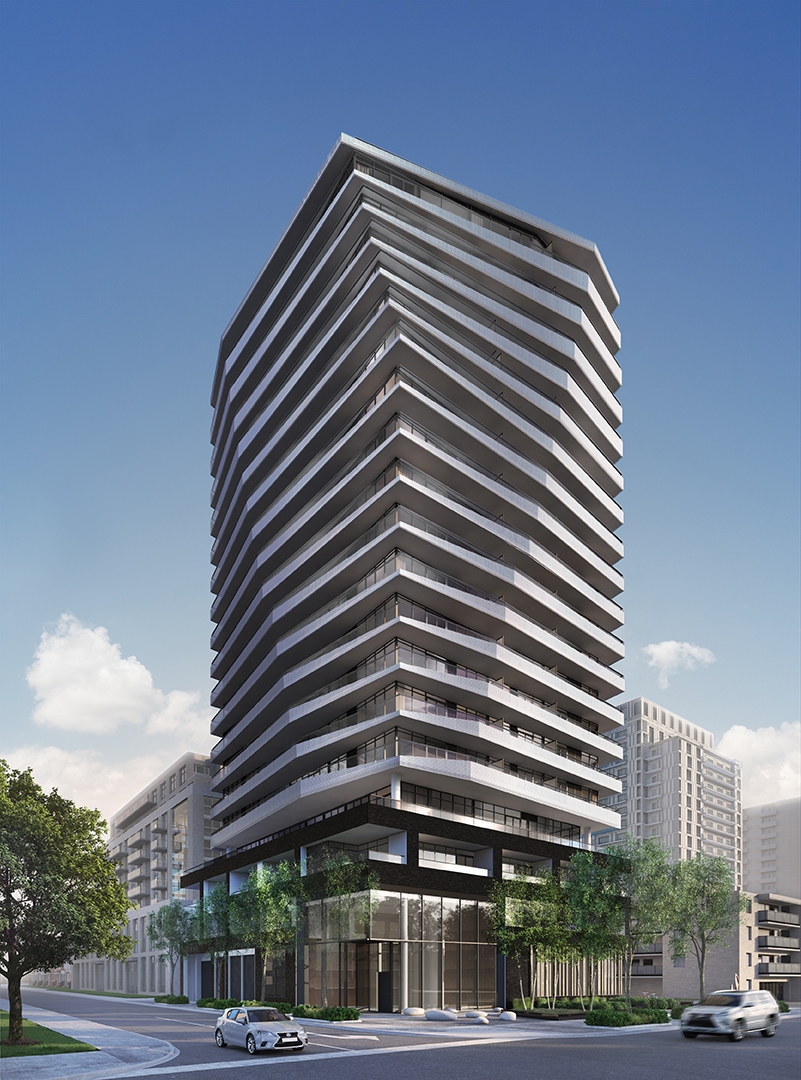 Located in the Yonge and Eglinton area, Distinction Condos finds itself in the heart of one of Toronto’s most sought after neighbourhoods. For the past few years, thousands have been flocking to North Toronto for it’s friendly neighbourhood vibe and unparalleled commercial and social opportunities. Complete with gourmet restaurants, premier shopping spots, and a host of other amenities, the area is simply the best you can get. Right by Distinction Condos is Eglinton subway stop, which connects to the Yonge line and offers quick and convenient transport to anywhere in the city. It’s not often that a subway stop is this close by a condo, but Distinction Condos has this luxury. Distinction Condos will also benefit from the planned light rail transit project that will run along Eglinton. This will be a boon to what is an already bustling area, connecting North Toronto with quick and reliable light rail transit. Many people believe the area to be a perfect hybrid of neighbourhood friendliness and downtown excitement, boasting some of the lowest crime rates in the city, with both families and young people alike flocking for this very reason. Not enough can be said about Yonge and Eglinton, which also has some of the top schools in the city, all the way form kindergarten to high school. Distinction Condos finds itself just east of Yonge, in a little pocket that is tucked away from the business of Yonge Street. LASH developments want to aim for a truly community feel in the building instead of a sterile condo atmosphere. They want people to feel like they are in a robust living space that rivals a lively neighbourhood block — this is where the future is headed, this is what Distinction Condos is all about.

Starting at $354,990, the brand new Distinction Condos is a fantastic price for what is a fantastic area. You will be hard pressed to find a condo like this for a price like that. Due to it being in it’s pre-development stage, Distinction Condos are currently offering suites for a steal of a price. This is because it’s not built yet, so the current buyers are the early adopters, gaining a fiscal advantage over those that buy later. This also means that Distinction Condos are a great investment at a great price. Real Estate in the city of Toronto is one of the safest routes one can take to make long term money. Many feel that pre-development condos are a risky business because they aren’t built yet, but that actually isn’t the case. The vast majority of projects go on to be successful projects that reap massive benefits for the owner, who paid a low price. Here at condoandloft.ca we want to make sure that we answer all your questions about the condos you are interested in and the process required to go through with a purchase. We have years of industry backed experience to ensure that you are getting the experts advice you need to weigh every option. There are so many variables to consider when purchasing a condo that go beyond price or building style, developer history for instance is a great indicator on the quality of a building. LASH developments is a reputable builder within Toronto and we believe that this new project is worth our endorsement. Given the area, it is safe to say that Distinction Condos will have no trouble selling it’s units, and being an early adopter of Distinction Condos is a great opportunity price wise.

LASH developments really want to focus on the community aspect of condo living, especially in a family oriented area like this one. Distinction Condos utilizes amazing communal space throughout the building to cultivate a feeling while also maintaining the privacy of it’s residents. This community feel is also aided by the fact that everything you could ever need is just a sort walk from Distinction Condos. Good community planning is entered around creating a hybrid of the residential and the commercial. Too often does one trump the other in favour of cutting costs, but not so at Distinction Condos. LASH developments understands that condo living has changed dramatically from what it was 10 or 20 years ago, it’s about extending excellence beyond the suite and into other aspects of communal living and meticulous urban planning — creating what we now know as Distinction Condos.

As a city, Toronto is simply one of the best in the world. Toronto has a rich cultural history as it is home to so many cultures, one of the many reasons LASH developments chose this city. Each neighbourhood has it’s own distinct feel, and there is so much to explore throughout the city. Years can be spent truly getting to know the atmosphere here, with so much to do and to see. Just limiting yourself to the Yonge and Eglinton area, there are fabulous parks, community centres, sports complexes, pools, educational facilities, all around the new Distinction Condos. The downtown core attracts thousands of tourists a year with it’s unbelievable amount of activity and awe inspiring atmosphere. Each year there are hundreds of festivals and events that rival the world’s biggest cities, and the best is that the new Distinction Condos is a very short subway ride away. You are connected to the very heart of the city for a fraction of downtown prices.

We at condoandloft.ca would love to talk to you more about this opportunity or any other one that you are interested. We have an amazing support team and oodles of experience. It’s in our best interest to make you the happiest you’ve ever been. Come join our list of satisfied customers and happy investors to transition to the next phase of your real estate life. The new Distinction Condos is definitely an option worth considering.