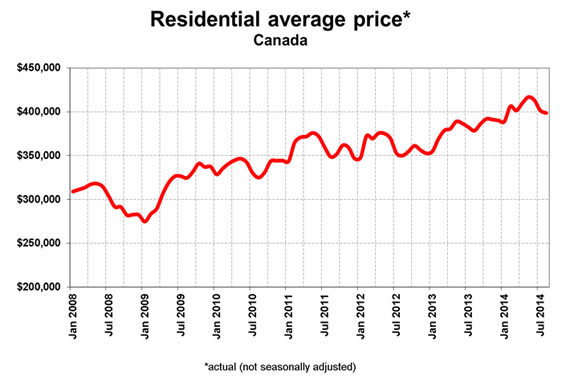 The number of home sales processed through the MLS® Systems of Canadian real estate
Boards and Associations rose 1.8 per cent on a month-over-month basis in August 2014, marking the seventh consecutive monthly increase, and the highest level for sales since January 2010.

Although activity rose in fewer than half of all local housing markets in August, the national tally was fuelled by monthly sales increases in Greater Vancouver, Calgary and Greater Toronto.

“Sales picked up in some of Canada’s most active and expensive real estate markets which fuelled another national increase,” said CREA President Beth Crosbie. “Even so, the national increase in sales does not reflect local trends in many markets across Canada. As always, all real estate is local and whether you’re looking to buy or sell, your local REALTOR® is your best source of information about the housing market where you currently live or might like to in the future.”

Actual (not seasonally adjusted) activity in August stood 2.1 per cent above levels reported in the same month last year. August sales were up from year-ago levels in just over half of all local markets, led by Greater Vancouver and Calgary.

“Sales activity in recent months has remained stronger than was anticipated earlier this year,” said Gregory Klump, CREA’s Chief Economist. “Listings and sales this spring were deferred due to unseasonably harsh weather, which subsequently supported activity once the delayed spring home buying season got into gear. This trend was reinforced by a decline in mortgage interest rates.”

“The boost from deferred sales is still expected to prove transitory,” continued Klump. “While national activity has yet to cool, sales were down from the previous month in the majority of Canada’s local markets, which may be early evidence that the transitory boost is fading. That said, low interest rates will continue to support housing affordability and sales activity.”

Year-to-date sales activity is up 4.3 per cent compared to the first eight months of 2013 and remains in line with the 10-year average for the period.

The number of newly listed homes fell 1.2 per cent in August compared to July. Led by Greater Toronto, new supply was down in about 60 per cent of local markets.

The national sales-to-new listings ratio was 55.5 per cent in August, up from 53.9 per cent in July. While this means the housing market became marginally tighter, it remains well entrenched within the range between 40 and 60 per cent that marks balanced territory.

Just over half of all local markets posted a sales-to-new listings ratio in this range in August. Of the remainder, more than half were sitting above the 60 per cent threshold that marks the border between balanced and seller’s market territory, almost all of which are located in British Columbia, Alberta and Southern Ontario.

There were 5.8 months of inventory nationally at the end of August 2014, down from 6.0 months in May, June and July. As with the sales-to-new listings ratio, the number of months of inventory remains well within balanced market territory but does point to a market that has become tighter in recent months.

The Aggregate Composite MLS® HPI rose by 5.33 per cent on a year-over-year basis in August. This was unchanged compared to July and little changed from June. Year-over-year price growth in August picked up slightly for townhouse/row units and apartment units but slowed for one-storey single family homes and was unchanged for two-storey single family homes.

Year-over-year price growth varied among local housing markets tracked by the index. As in recent months, the biggest gains were posted by Calgary (+9.83 per cent), Greater Toronto (+7.82 per cent), and Greater Vancouver (+5.01 per cent).

The MLS® Home Price Index (MLS® HPI) provides a better gauge of price trends than is possible using averages because it is not affected by changes in the mix of sales activity the way that average price is.

The actual (not seasonally adjusted) national average price for homes sold in August 2014 was $398,618, up 5.3 per cent from the same month last year.

The national average price continues to be skewed upward by sales activity in Greater Vancouver and Greater Toronto, which are among Canada’s largest and most expensive housing markets. Excluding these two markets from the calculation, the average price is a relatively more modest $324,738 and the year-over-year increase shrinks to 3.9 per cent.

The information contained in this news release combines both major market and national MLS® sales information from the previous month.

CREA cautions that average price information can be useful in establishing trends over time, but does not indicate actual prices in centres comprised of widely divergent neighborhoods or account for price differential between geographic areas. Statistical information contained in this report includes all housing types.

MLS® is a co-operative marketing system used only by Canada’s real estate Boards to ensure maximum exposure of properties listed for sale.

The Canadian Real Estate Association (CREA) is one of Canada’s largest single-industry trade associations, representing more than 111,000 REALTORS® working through some 90 real estate Boards and Associations.